A three-dimensional model of the rat vibrissal array

The rat whisker system is one of the most commonly used models to study how the brain encodes and processes somatosensory information. To date, however, researchers have been unable to quantify the mechanosensory input at the base of each whisker, because the field lacks accurate models of three-dimensional whisker dynamics.

To close this gap, we developed WHISKiT Physics, a simulation framework that incorporates realistic morphology of the full rat whisker array to predict time-varying mechanical signals for all whiskers. The simulation system can be used to predict input signals during a variety of behaviors, something that would be difficult or impossible in the biological animal.

We use WHISKiT Physics to simulate mechanical signals across the array during different behavioral conditions such as passive whisker stimulation, active whisking against two pegs, and active whisking in a natural environment (see videos below). In all behavioral conditions, interactions between array morphology and individual whisker geometry shape the tactile input to the whisker system.

In the following videos, examples of WHISKiT Physics simulations are shown for three different scenarios:

Video 1: A vertical peg was simulated to move from rostral to caudal through the middle of the immobile right array. The peg moves at constant speed (0.3 m/s) from rostral to caudal. The right upper panel shows the visualization of the 3D simulation, showing the rat head and the right whisker array. The upper left quadrant shows two illustrations of the mystacial pad, each circle representing a follicle. The color scale on the left indicates the magnitude of the moment (M) whereas the color scale on the right indicates the magnitude of the force (F) generated at the base of each whisker. Underneath, the whisker basepoints (white dots) and the whiskers (white lines) are plotted in 3D , while the 3D vectors of the mechanical signals are superimposed at each basepoint. Note that the view angle is different from the visualization. The bottom left panel shows M (same color scale) evolving over time for each of the whiskers (y-axis). Similarly, the bottom right panel, shows the point of contact for each whisker over time, indicated by the grey color scale. The point of contact is normalized to the length of the whisker, i.e. tip = 1.0.

Video 2: Simulation of active whisking against a fixed, vertical peg. Each whisker is driven at its base according to established kinematic equations for whisking motion (19). One cycle of protraction and retraction of the array lasts 125 ms, equivalent to a whisking frequency of 8 Hz. The peg is positioned laterally, 20 mm from the midline of the head with an offset of 10 mm from the nose tip.

Video 3: Whiskers perform the identical whisking motion as in Movie S3 (Scenario 3), but the array is positioned in front of the opening of a 3D scan of a drainpipe, so that the rat is simulated to actively palpate a typical object found in its natural habitat. 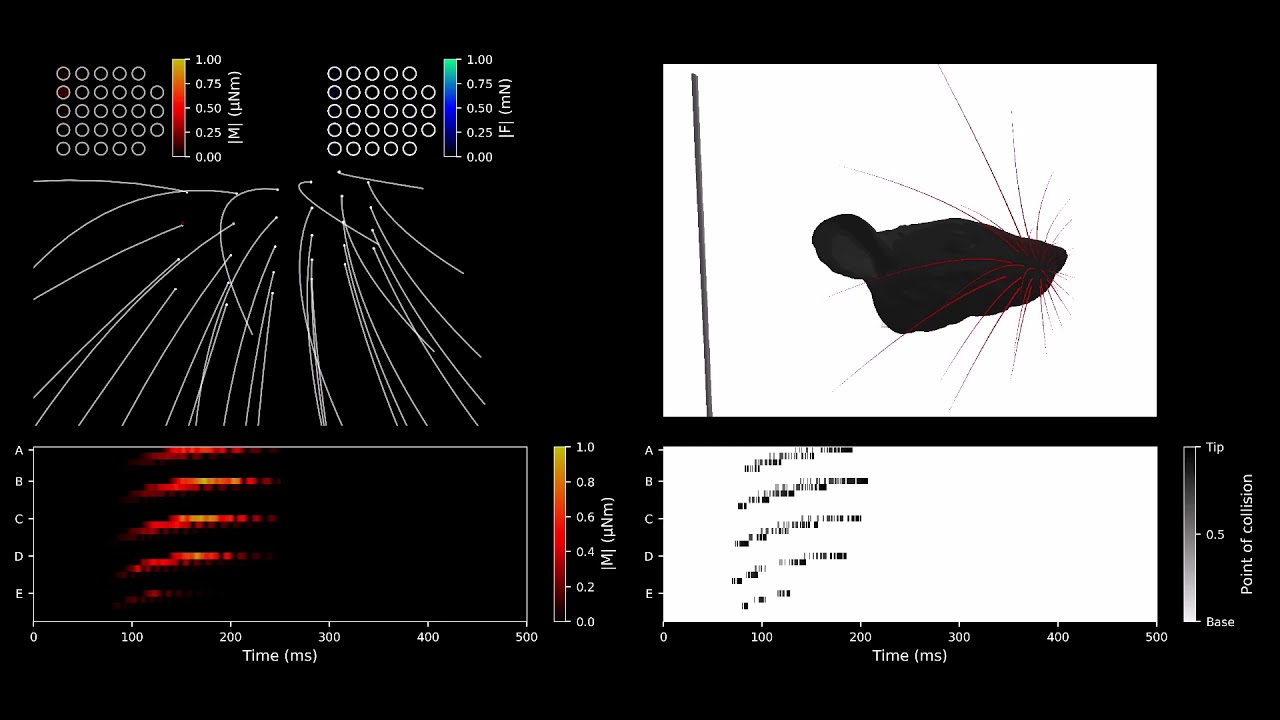 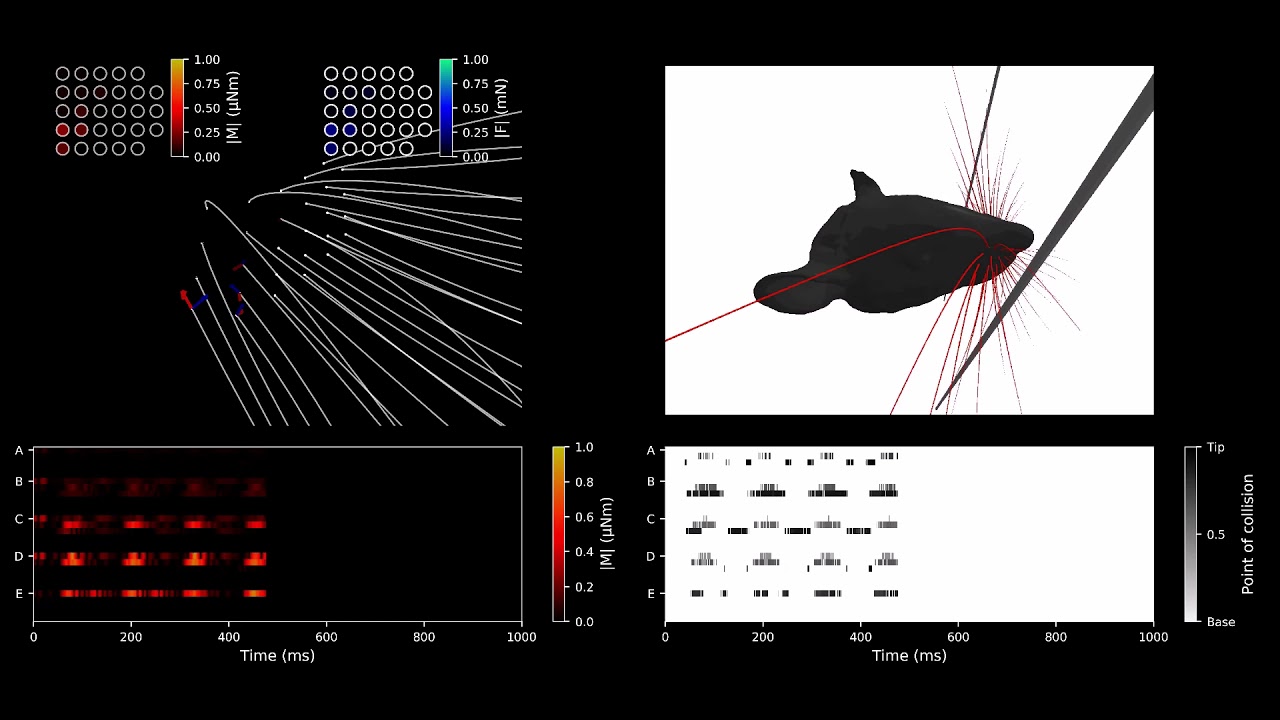 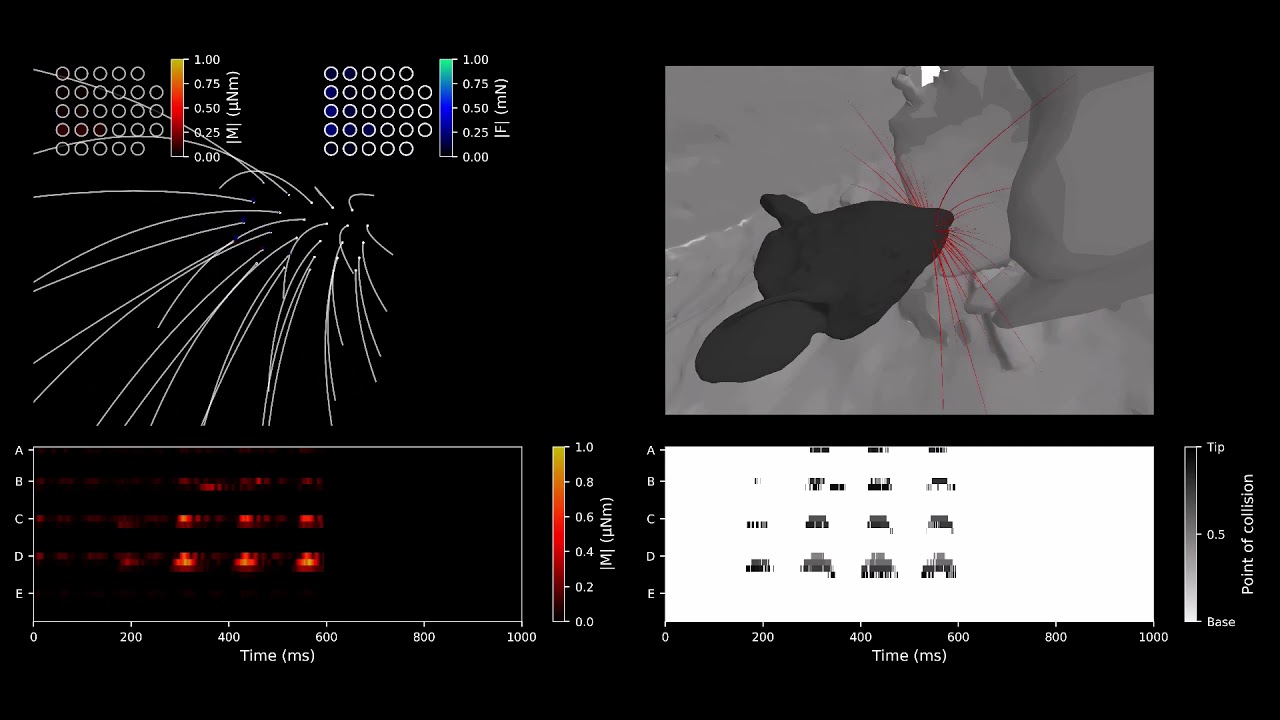